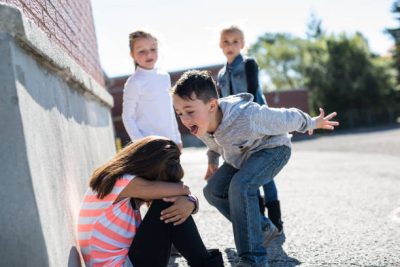 The word bully has come to be the catch all word to describe someone who has done something unkind to another child.  I want to take this opportunity to clarify what bullying is, and what it isn’t.

There are behaviors that are rude, mean, and bullying. What we see most of the time is either rude or mean. While neither of them are good or acceptable, they are not bullying.

Please read on to learn more about how we determine, is it rude, mean or bullying?

Rude = Inadvertently saying or doing something that hurts someone else.

From kids, rudeness might look more like burping in someone’s face, jumping ahead in line, bragging about achieving the highest grade or even throwing a crushed up pile of leaves in someone’s face. On their own, any of these behaviors could appear as elements of bullying, but when looked at in context, incidents of rudeness are usually spontaneous, unplanned inconsideration, based on thoughtlessness, poor manners or narcissism, but not meant to actually hurt someone.

Mean = Purposefully saying or doing something to hurt someone once (or maybe twice).

The main distinction between “rude” and “mean” behavior has to do with intention; while rudeness is often unintentional, mean behavior very much aims to hurt or depreciate someone. Kids are mean to each other when they criticize clothing, appearance, intelligence, coolness or just about anything else they can find to denigrate. Meanness also sounds like words spoken in anger — impulsive cruelty that is often regretted in short order. Very often, mean behavior in kids is motivated by angry feelings and/or the misguided goal of propping themselves up in comparison to the person they are putting down. Commonly, meanness in kids sounds an awful lot like:

Make no mistake; mean behaviors can wound deeply and adults can make a huge difference in the lives of young people when they hold kids accountable for being mean. Yet, meanness is different from bullying in important ways that should be understood, and differentiated from bullying when it comes to intervention.

Bullying = Intentionally aggressive behavior, repeated over time, that involves an imbalance of power.

Experts agree that bullying entails three key elements: an intent to harm, a power imbalance and repeated acts or threats of aggressive behavior. Kids who bully say or do something intentionally hurtful to others and they keep doing it, with no sense of regret or remorse — even when targets of bullying show or express their hurt or tell the aggressors to stop.

Bullying may be physical, verbal, relational or carried out via technology:

We need to be here, to listen and observe the interactions that happen with our children and to guide them to develop healthy communication skills, to be able to identify their feelings and to ask for what they need. These are the skills that will eliminate the need for any behavior that is either rude, mean or bullying.